Love is coming home on a Monday evening, and finding your partner cooking Cambodian food.

It turns out that Makot Pech market on St. John's not only has a full selection of Southeast Asian condiments, canned foods and dry goods, but also a selection of some otherwise hard-to-find vegetables. The star vegetable of the night was bottle gourd (labeled there as Asian green squash; Hindi speakers may know it as "dudhi"). 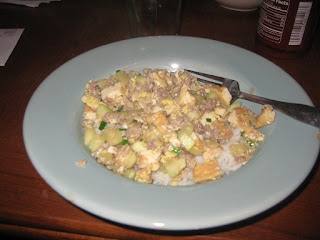 Heat oil in large skillet or wok over medium-high heat and sauté the garlic until golden brown. Add the pork, tofu, fish sauce, sugar and squash and cook, stirring to break up the pork, until the pork is cooked through and the squash is tender, about 5 minutes. Add the egg and cook, stirring, until it is firm. Remove from the heat, sprinkle with the scallion and stir well. Serve with jasmine rice and optional Sriracha.

Posted by Joseph at 3:44 AM No comments: Links to this post

The Little One and I finally got to Korea House yesterday. It really was exceptional. To begin with: Four banchan, including fish cake, konnyaku jelly, and two different kinds of kimchi, radish and cabbage. The kimchis were fermented to the point of pungency and heavy on the chili pepper. LO devoured the fish cakes--the only non-spicy banchan--so I only got to sample a few, but they were good, with a nice balance of soy and sesame seasoning them. The konnyaku jelly was delicious, well-seasoned with soy, scallion and chili, and a brave choice for Portland.

LO was in the mood for beef, so I got her the bibimbap. I did not sample it because she insisted on adding soy sauce to it, which was not to my taste. But the egg looked nicely fried, the beef seemed well-seared, and there was a wide variety of vegetables.

I had the 고등어조림 (go deung eo jo rim), braised mackerel with Korean radish and heroic quantities of gochujang. The mackerel was served on the bone, as is traditional, the radish pungent as it should be, and the whole ensemble spicily delicious.

As a restaurant, it had a few of the decor elements that I am used to: the stainless steel lidded rice bowls, blond wood tables and, how could I have forgotten, a massive photographic mural of some very picturesque mountains and waterfall in Korea.

I won't say that there's no reason to visit their competitor, Little Seoul, which did, after all, have Korean rice with red beans, a specialty worth seeking. But in terms of the flavors and portion sizes, Korea House is closer to the mark, and makes no compromises.

Posted by Joseph at 3:53 AM No comments: Links to this post

Episode 31: WWJCD? (What Would Julia Child Do?)

Marché in downtown Lewiston advertises that they make their crepes using Julia Child's recipe. I can believe it. The results are fluffy and taste as if they would go equally well with sweet or savory fillings. Quite different from the no less delicious, buckwheat-based, Franco-American versions one can find at various greasy spoons in L-A.

Would Julia Child have filled them with "house made duck confit, mission fig jam, bleu cheese, truffle" (and also some unlisted arugula)? She might have left out the fig jam, which melted and puddled out when exposed to the heat of the crepes and the duck. She likely would have served the arugula as a lightly dressed salad on the side, rather than letting it wilt a bit in the filling. Otherwise, all seemed as ineffably delicious as she would have liked.

But would Julia Child have eaten it? Yes, I'm pretty sure she would have.

Posted by Joseph at 2:42 PM No comments: Links to this post

Episode 30: Update from Aroma, and another Dispatch from Lewiston

If I let it this could become the weekly "exploration of Aroma's menu" blog. It's the place we seem to default to when I'm too tired to cook and we don't want to think to hard about where to eat out. I'm not going to post here everything I try something new off their menu--only when something is so delicious I think everyone should try it. Today that something is the Goat Chettinad Curry. This is a southern Indian dish, from the state of Tamil Nadu, and thus densely seasoned with curry leaves, mustard seeds and chilis. The result is the most savory goat I've had in Maine (even better than the Somali goat at Safari restaurant).

I've tried yet another Thai place in Lewiston, Pepper and Spice at 825 Lisbon Street. (I hesitate to link to their website, because they have some annoying music playing on their homepage.) I can't do a head-to-head comparison with Thai Jarearn, as I did not order Jungle Curry (or duck). But I did get a pork garpow that was nose-tinglingly spicy and basil-fragrant. (And the prices are lower--amazingly affordable, in fact.)

Posted by Joseph at 4:14 PM No comments: Links to this post

The name is ridiculous. The menu is limited. But Bubble Maineia almost certainly serves the best Chinese food in Maine. Possibly the best Chinese food north of Boston. And if one limits one's consideration to the sub-genre of "Taiwanese snack food joints," then they've even got some of their countrymen in Flushing beat. If I worked in Portland, I would be seriously tempted to eat lunch there every day. As it is, I know what my response will be from now on whenever the Little One asks for Chinese.

If only they were open on Christmas.

Things to order: The beef stew noodle soup, spicy and fragrant with star anise, and generously loaded up with both meat and bok choi; the teriyaki pork bun; the five spice egg. There's more that's probably just as good if not better, but this is what I've been able to sample so far. Washed down on a cold night with a hot ginger almond milk tea, and it hit all the right spots.

Dear Portland foodies: Don't complain, just go, and order widely and adventurously. If that beef stew noodle soup goes the way of the erstwhile tortas at Taco Trio, or the rumored Three Cup Chicken at Chia Sen, I will blame you collectively and individually, and curse you deeply in my soul.

Dear proprietors of Bubble Maineia: Would you consider running some Taiwanese favorites as specials? Perhaps an oyster pancake--that would showcase Maine's native bounty of the sea. And if you have a stash of stinky tofu in the back, I would pay top dollar (at least as long as Hot Librarian is not dining with me). And just one thing more: Could you please open, for just a couple hours around lunchtime, on December 25th? We'd tell every Jew we know in town and make it worth your while.

Posted by Joseph at 5:15 PM No comments: Links to this post